Excited about our baby shower gifts, we decided to install the car seat.

We (meaning Bryce, Bandit, Banjo, and myself) went out to the car to get this party started and become one step closer to being prepared for little dude’s arrival.

Joje (Banjo) inspected the new fancy gear and approved of its installation.

Bryce took the base of the car seat and began placing it in the car. There was some talk about which side little dude should sit on.

Once a decision had been made, Bryce began doing the manly setup. He also wasn’t planning on me taking photos of it. Take a moment to appreciate that although unplanned, his shirt matches the color of our car and his button up shirt matches the blue on the car seat. He’s practically commercial ready. Do any of you notice how in commercials the people always wear matching colors to the product?

This EOS girl likes her whole world to match her pastel chapstick. This lady likes her shirt and canisters to match her Swiffer handle. And this guy… you get the point.

I got off topic.

Bandit was chilling in the front seat watching all of the action. 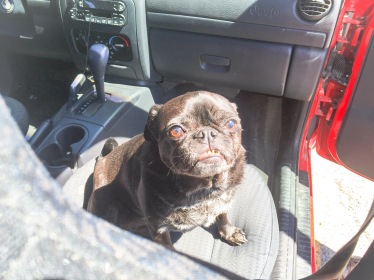 That’s a face only a mother can love. I love him and those crooked teeth.

Bryce at this point is getting things looking pretty fantastic.

Then I noticed that Banjo was missing. There weren’t as many snorts as usual. Too quiet. While Bryce continued with the car seat, I went on the hunt. He wasn’t in sight. And Bandit was right next to me. They usually disappear together. He wasn’t in the yard and he wasn’t around the car which left only one option. The neighbors house. I ran down the street calling his name when the happiest pug you’ve ever seen comes (not so gracefully) running towards me with the biggest grin on his face. He was indeed at the neighbors. But not just in their yard. He walked his cute curly tail straight through their back door, into the kitchen, and went to work cleaning up any crumbs. Luckily the neighbors found him adorable and said he can come over any time.

When I got back to the car the seat had been clicked into the base and Bryce was right where I left him, only reading the instruction manual.

We are ready to rock and roll.