Do you see a common thread? {Hint: it’s FEAR}

One day my amazing friend, Mindy, looked at me casually and said “so can I throw you a baby shower?” In that moment, without thinking, without guarding my heart or my head, I said yes. I went home that night and told Bryce we were having a baby shower. Even Bryce seemed oddly ok with it. What was happening to us? Is this life without your guard up?

I began pinning away because that’s what you do whenever something must be planned.

We made plans. One shower in Idaho before little dude arrives and one after in Oregon.

Next on my to-do list was to tell Marissa. I sent her a text and while texting her I felt such peace. I told her that we were taking our guard down. We were having a baby shower and she must come to it. It wouldn’t be right without her there. She was ELATED. It was amazing to learn that while we had previously guarded our hearts, it was hurting hers. Marissa didn’t feel we fully trusted her with this decision. And you know what. She was right and I hate to admit it.  The peace that came from tearing down our walls was unexpected. I thought I’d be doing something I was afraid to do. But it just felt so right. I’m so grateful that Marissa had the patience to put up with us while we lived in fear. We are so blessed to have her in our life.

So the pins continued, the invitations designed, and a party was planned. Mindy and my friend Casey took care of all the details. All I had to do was show up.

Mindy’s home is a stunner anyway. Add a touch of pixie dust and it became adorable {insert Peter Pan touches}.

I was so excited to not only have Marissa and her family come to the shower, but also my mom made the awful trek to nowhere Idaho. I’m so happy that she came (even though I told her she didn’t need to because we will be having an Oregon shower). I’m so glad she got to meet Marissa. All of my brothers were in town too so after the shower they showed up and she got to meet them all. She’s officially met all of my family. Next up: Bryce’s side.

When first walking in, there was a banner that said “Welcome lil’ dude.” So perfect.

So many people came. Bryce and I have an amazing support group. We can’t express our gratitude for our friends and family for being there and for joining in our excitement.

Our friends were also very generous. Not only did Bryce and I receive gifts, but Marissa received gifts as well. It was our shower. I couldn’t have a shower without her. I wanted her recognized and honored. I love that everyone was able to meet her.

Isn’t she just the cutest? I can’t believe how big her tummy is getting. He’s close to his debut. We are beyond excited (and scared to death) and Marissa is not so patiently waiting to be done with pregnancy. She’s reached that point of constant discomfort.

We ate together, tied knots into blankets for little dude and for Marissa, and painted wood blocks for the little guy to play with. It was so much fun. The party was a relaxed environment. No games here. We had plenty of fun just being in each others company.

As the party died down and people started to leave we managed to snap a group photo. 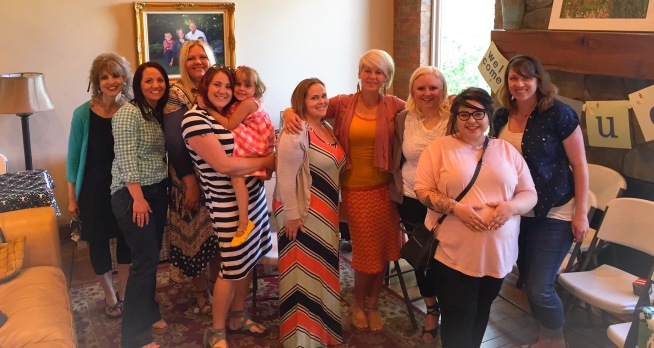 That’s one good looking group. From left to right is my mom, Mindy, Casey, Jessa, Sami, Alysia, Tamra, me, Marissa, and Lindsey. We are so so so blessed to have such an amazing support system for us and for Marissa. In this photo are 4 birth moms who are so full of love. What an amazing experience.

The boys arrived as things died down (boys = Bryce and my brothers). Bryce got to see Marissa (she calls him a unicorn because he’s always talked about but not always around) and then he started looking at the gifts.

We assembled the stroller we received and Bryce gave it a test-drive. I must say, him behind a stroller channeling his inner dad status melted my heart. I’m sooooo excited to see him become a dad. He will be the best at it.

At the end of the day we were exhausted but excited. After saying goodbye to my mom (but not for too long!) we started arranging the nursery. I was nesting! You guys! It was so much fun and made me so happy to see his room come together. We still have so much more to get so that everything is perfect, but we couldn’t be happier. 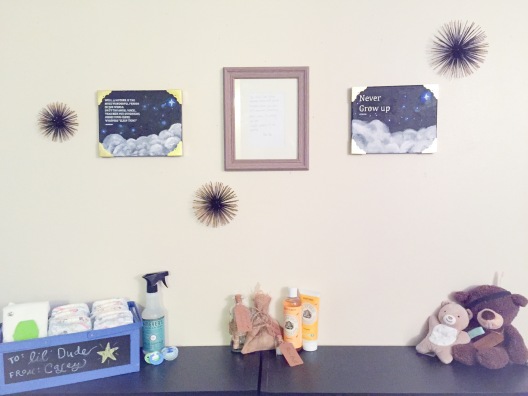 This is my favorite part of the room so far. It’s comprised of gifts from the shower that mean so much to us. Thank you Casey for painting these pictures (and one not shown – Marissa, little dude, and I each received one). Thank you Marissa for your thoughtful gift.

Remember that one time when Marissa was “courting” us and sent weekly gifts? Remember how thoughtful and creative she was? Yeah, nothing has changed. She’s still as thoughtful and amazing. Everything is touched by Peter Pan: Shells from Mermaid Lagoon, Michael’s teddy bear, a map of Neverland, and pixie dust. Lastly is a hand-written and framed note {think Juno} that says “You know that place between sleep and awake, the place where you can still remember dreaming? That’s where I’ll always love you. That’s where I’ll be waiting. – Peter Pan”

Yes, I’m a hypocrite. But I absolutely couldn’t be happier.

This little dude is so loved. He has so much family waiting for his arrival. So much love.

We can’t wait to meet you.